China and the United States Economic Cooperation “Hundred Days Plan” has reached 10 early harvest results in various fields such as agricultural trade, investment, energy and financial services, and is currently conducting a follow-up consultation on the “Hundred Days Plan”. 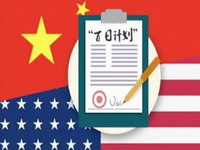 Among them, in the field of agricultural trade, China promised to July 16 to achieve the US beef exports to China, the United States promised July 16 before the release of China’s own production of cooked poultry meat export rules of the United States, both sides are earnestly fulfill their commitments. The United States on June 15 to inform the Chinese Ministry of Agriculture and AQSIQ, the United States has fulfilled the promise, on the date of the US Department of Agriculture website published in China production of cooked poultry meat export US agreement rules, will be in accordance with the procedures for 60 days of public comment period, Public opinion.

Comparison of US trade data between China and China in 2015 and 2016: US exports to China remain relatively stable, and China’s imports to the United States have narrowed sharply

In addition, according to data released by the General Administration of Customs in March, in February this year, China’s imports surge 44%, while the emergence of more than 600 billion yuan trade deficit for the first time in three years.

China’s current household savings at a high level, which led to a more serious investment waste and cyclical investment frenzy caused by the bubble, and this effect is extensive, whether it is every day to eat garlic, or shoulder the responsibility of the development of China’s special economic zones.

An expert on China’s research at Columbia University, said the negotiations in the United States were clever – reducing the trade deficit between China and the United States, not by restricting China’s imports, but trying to expand exports to China. Said it was easier to accept.

“Hundred Days Plan” may include: China to relax the financial investment restrictions on the United States, abolition of the ban on beef imports.

China will provide a more open market to the United States in terms of financial investment and beef exports to help avoid trade wars, but does not mention specific open measures.

Reported that China will terminate a ban on imports of beef from the United States since 2003 and import more agricultural products to ease the tight trade relations between the two countries.

In the field of financial investment, foreign investors can not hold a majority stake in China’s securities and insurance companies, according to China’s current foreign investment regulations. In fact, during the Obama administration, China and the United States had negotiated the issue of bilateral investment treaty (BIT).

“China had already intended to ease investment restrictions in the United States in BIT, but the talks were put on hold after the US presidential election,” said a Chinese official involved in negotiations between China and the United States.

Media reports that the US side is putting pressure on China to reduce car tariffs and to relax restrictions on the sale of certain high-tech products in China, while the Chinese side is seeking for Chinese enterprises to invest more in the United States to obtain more protection.

The talks also failed to touch China’s steel exports, which is one of the reasons leading to trade tensions between the two countries.

It is reported that the Trump government is developing an administrative order to investigate the dumping of unfair products by foreign companies, reporting that the order may have an impact on tariffs on a range of products including steel, aluminum, household appliances and so on.

Asked on Friday whether “Trump is planning to sign an administrative order for countries that dump steel to the United States,” Rose said. “When they announced the move, they issued administrative orders and executive memoranda, Rather than responding to rumors.”

“This is not the subject of today’s talks, but we are paying close attention to this issue or other alternatives, including from an economic point of view, energy production, and national security,” said Ross, when asked about the bankruptcy-related issues in Westinghouse. “I just think that it is clear that any such sanctions involving foreign investment will be made through the US Foreign Investment Commission (CFIUS).”