January 30, AQSIQ held a regular press conference, AQSIQ Information Office, spokesman Li Jing released jackets and other 33 kinds of product quality supervision and spot checks, the quality control system in 2014 related to the origin of the work situation AQSIQ Ebola outbreak response work carried out in 2014 Entry-Exit Inspection and Quarantine, the 2014 special equipment accidents, in 2014 law enforcement and inspection system of the situation and a typical case, the inspection and supervision of imported coal situation, imports of dairy production enterprises registered foreign content eight aspects of the situation and so on. The following is the specific release content: 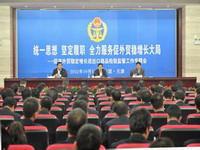 1. down jackets and other 33 kinds of product quality supervision and spot checks

The highlight for consumer goods supervision, a sample of 23 kinds of consumer products, including textiles and clothing, household appliances, automobile-related products, decoration materials, accounting for this sample 69.7% of product categories, including consumer goods random number and batch number of companies are more than The sampling of the 76.5% of the total number of enterprises and products. The sampling of 33 kinds of products, involving six kinds of industrial products production license, 10 kinds of national mandatory product certification, five kinds of measuring instruments licensed products, accounting for 63.6% of the total number of this sample product categories.

In this sample of products, the past five years has been more than two times in a row tracking survey a total of 32 kinds of products, accounting for 97% of the total sampling of product categories; which tracked more than three times the checks have 22 kinds of products, accounting for this 66.7% of the total sampling product categories. The last spot on the 259 failed enterprises in the tracking survey found that 57 companies are no longer due to the production of similar products or have other reasons to cease not be able to get a sample, the actual checks to 202 enterprise products, 166 The company’s product checks pass, there are 36 companies failed twice in product quality checks.

The problem for the product quality supervision and spot checks found, AQSIQ has instructed provinces (autonomous regions and municipalities), quality and technical supervision departments in accordance with “People’s Republic of China Product Quality Law” and “product quality supervision and inspection management approach” and other laws and regulations regulations, refused to do a good job handling the follow-up inspection of enterprises and substandard products manufacturer, shall order the company to stop production and sales of substandard products, in accordance with the relevant provisions of the destroyed under supervision or make the necessary technical processing and manufacturing enterprises to increase follow-up supervision and inspection. Meanwhile, in this sample of substandard products briefing local government and relevant departments. Sampling results and the list of specific products business, can be found on the AQSIQ website.

2. the 2014 quality control system to work the situation of origin

2014, the National Administration of Quality Supervision, Inspection and Quarantine system and implement the State Council “to promote foreign trade, steady growth” requirements, establish a free trade zone with the national strategy to adapt, and local governments and foreign trade business needs unity of origin work system. Exit inspection and quarantine departments around the combined area of export product characteristics, and actively explore, be creative, to ensure the quality of the premise of the visa, the origin of the trial a number of incentives to fully tap the original certificate in tariff reduction in the potential to enable enterprises to make full use make good use of this trade coupons.

Country of origin of inspection and quarantine systems work highlights are frequent, where Shenzhen, Guangdong, Jiangsu, Zhejiang, Shandong, Ningbo Inspection and Quarantine Bureau actively play a leading role: First, to increase the FTA preferential origin of propaganda, to broaden and foreign trade enterprises channels of communication; the second is the origin of the applicant to implement electronic filing, registration and cancellation applicant examined, what the ex post regulation by strengthening the quality of work to ensure that visa; three is the implementation of a paperless declaration of origin, certificate of origin automatic pilot trial single; Fourth, establish a retirement certificate of origin queries answered “fast track” to track the effectiveness of the use of the FTA preferential policies to ensure the smooth export of goods to enjoy preferential tariffs on imports of customs authorities.

As of January 28 World Health Organization Bulletin total 22,158 cases of Ebola haemorrhagic fever cases, 8859 cases of death. At present, the epidemic mainly in Guinea, Liberia, Sierra Leone. As of January 29, China’s cumulative quarantine port from 1893 outbreak Countries aircraft sorties, 64 ships, trains, 218, 68 cars, container box 20950, 7287 batch of goods, disposal of solid waste from the outbreak of 26316 Country bags, liquid wastes 1247 car. 30,415 people from the outbreak investigation Country staff (in each case are completed epidemiological investigation, registration information, can be traced back to do, and the information is transmitted to the local health department), found that people with symptoms such as fever, 93, has so far not found Ebo Pull imported cases of hemorrhagic fever.

January 15 and 21, China’s second batch of aid Sierra Leone mobile laboratory and medical teams, as well as the first batch of aid to Liberia’s Liberation Army medical teams were riding Eastern Airlines charter flight home, personnel and materials and equipment such as immigration formalities were In Beijing, Chengdu, Chongqing and other airports handled AQSIQ port in accordance with the guidance of the relevant requirements and procedures to carry out each entry quarantine and customs clearance facilitation measures, the successful completion of 244 immigration and quarantine mission found no Ebola haemorrhagic fever cases.

4. the 2014 entry-exit inspection and quarantine situation

Import and export of edible agricultural products and feed safety risk monitoring situation. 2014, the National CIQ samples were taken to monitor 41651, involving 896 substances monitoring, access monitoring results 260,566, import sample pass rate of 98.01% overall. Among them, the import control sample 29036, the sample pass rate of 97.15%; export monitoring sample 12615, the passing rate of 98.10% export samples. 28 cases involving defective products, primarily for the detection of illegal substances unqualified transgenic lines, dioxin, aflatoxin, heavy metals, sulfur dioxide, microorganisms, pesticide and veterinary drug residues, parasites. For the above problem detection products, CIQ has been processed in accordance with relevant regulations, especially for detection of genetically modified MIR162 imported 1.43 million tons of US corn and its products, according to the law made the return or destruction.

2014, a total of inspection and supervision of import of dangerous chemicals 119,000 grant, total 349.99 million tons, 264.36 billion US dollars, 6881 batch failure detection, namely 7.949 million tons, 6.57 billion US dollars. These unqualified hazardous chemicals, have been urging companies to take corrective measures, such as rescue package depending on the circumstances, promptly eliminate safety hazards.

6. in 2014 law enforcement and inspection system of the situation and a typical case

2014, the national quality supervision system of law enforcement officers were dispatched 1.447 million passengers, investigated 61,000 cases of illegal since the quality, the value of 4.53 billion yuan involved, investigating major cases since 1977, from 493 cases transferred to the police; a typical case to the public 39 . Below, announced 10 cases of typical cases:

Zhongshan City, Guangdong Province Bureau of Quality Supervision 3. Zhongshan Zhu agency investigated hardware appliances factory production does not meet the standard of domestic gas with the case. According to reports, Zhongshan Municipal Quality Supervision Bureau of Zhongshan City, according to the law society hardware electrical plant Zhu enforcement inspection, the scene found that the plant has not obtained the production of industrial production permit forgery, fraudulent use of “GAIKE Oriental Century Gree Electric Appliance Co., Ltd.” home Gas cooker 440 units. Upon examination revealed that domestic gas with product quality does not meet national standards. At present, the case has been transferred to public security authorities.

Quality Supervision Bureau of Shandong Province, Zibo Xintai investigate Petrochemical Co., Ltd. and selling ordinary diesel case does not meet the mandatory standards. According to reports, Shandong Province Bureau of Quality Supervision Xintai Zibo Petrochemical Co., according to the law enforcement inspection. Found that the company’s ordinary diesel cetane number was 43.8, does not meet GB252-2011 “ordinary diesel” in the requirements for the cetane number is not less than 45. After investigation, the company does not comply with the mandatory standards and selling a total of ordinary diesel 3058.29 tons, the total value of 22,952,500 yuan. Currently, the company has dealt with according to law.

7. imported coal inspection and supervision of the situation

To guarantee the quality and safety of imported dairy products from the source, the AQSIQ, CNCA regulations, since May 1, 2014, non-registered foreign producers of dairy production may not be imported. Meanwhile, experts have trade records of 47 dairy exporting quality and safety analyzes, develop implementation guidelines and work rules; on health conditions and internal control system to evaluate foreign manufacturers, the official responsible for monitoring the implementation of the exporting country.

As of December 31, 2014, 29 countries have ratified 1836 registered dairy producers, which contains 64 infant formula milk powder production enterprises. Next, the national commission Registration will implement dynamic management, from time to time to check on the Registration, Evaluation of the effectiveness and strengthen what the ex post regulation; establishment of foreign enterprises registered management and linkage mechanism port inspection and quarantine, the problems identified in a timely manner retrospective analysis of registered enterprises to adopt risk warning, tightened supervision measures revoked registration; strengthen cooperation with overseas authorities, and timely information about the company and its products overseas registration information, and urge them to implement the offshore regulatory responsibility; develop overseas registration review technical seminars to improve on-site inspection and registration review targeted to enhance the effectiveness of risk prevention and control.