Grasp the Opportunity of the Implementing of Free Trade Agreements and Bolster China-Switzerland, China-Iceland New Economic and Trade Development

The China-Switzerland and China-Iceland Free Trade Agreements will officially enter into effect on July 1, 2014. Switzerland and Iceland are both important non-EU countries in Europe, and members of the European Free Trade Association (including Switzerland, Iceland, Norway and Liechtenstein), as well as China’s important economic and trade partner in Europe. With the implementation of the two Free Trade Agreements, bilateral trade between China and the two foreign countries will enter a new era of zero tariff, and bilateral economic and trade cooperation will step into a new stage. 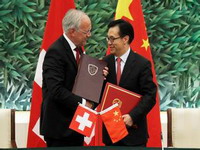 China-Switzerland FTA negotiation was officially launched in 2011. After nine rounds of negotiations, in May 2013 and witnessed by Chinese Premier Li Keqiang and President of Switzerland Ueli Maurer, Minister of Commerce Gao Hucheng signed the memorandum of understanding on finishing China-Switzerland FTA negotiations with Johann Schneider-Ammann, Swiss federal councilor and head of the Swiss Federal Department of Economic Affairs. In July 2013, Gao and Schneider-Ammann signed the China-Switzerland Free Trade Agreement on behalf of the two governments. China-Iceland FTA negotiation was launched in 2006, and after six rounds of negotiations, in April 2013 and witnessed by Chinese Premier Li Keqiang and Iceland Prime Minister Jóhanna Sigurzardóttir, Chinese Minister of Commerce Gao Hucheng and Iceland Foreign Minister Ossur Skarphedinsson signed China-Iceland FTA in Beijing. The achievement of the above two FTAs is the result of the unremitting endeavor of the negotiation groups of the three countries, and also the result of the high attention of the leaders of the three countries.

Firstly, the high proportion of zero tariffs in China-Switzerland and China-Iceland Free Trade Agreements will help Chinese enterprises to gain access conditions better than other countries in Switzerland and Iceland. In terms of China-Switzerland FTA, about 99.7% of China’s exports to Switzerland will be zero tariffs and the free-tariff percentage of Swiss’ exports to China comes to 84.2%. With partial tax reduction products included, the percentage of Chinese exports to Swiss involving tax reduction will be 99.99% and that of Swiss exports to China 96.5%. In terms of industrial products, Switzerland promised to carry out the zero-tariff on all of them when the FTA took effect, with textiles, clothes, footwear and headwear, auto parts and metal products, China’s major exports, enjoying a big margin of tax reduction. For agro-food, Switzerland promised to carry out the zero-tariff on 76.3% of Chinese exports, and partial tax reduction on another 16% . Switzerland also promised that 216 processed agricultural products by China are tariff-free on its industrial component, accounting for 7.2% of China’s agricultural exports to Switzerland. Switzerland’s lowering of market access will contribute to China’s expanding export of competitive products like fruits, vegetable, candies, sweet food and pastry.

In line with the China-Iceland FTA, Iceland will carry out zero tariff on all Chinese industrial products and aquatic products, 99.8% of China’s total volume of exports to the country, from the date when the agreement comes into force. Taxes on 30 items of farm products such as animal organs, dairy products and vegetables will be reduced, and Iceland promises to levy tax rates not above 65% on 10 farm products including venison and pigeon meat. It is the first time that China succeeds in requesting a developed country to set a ceiling on the tariff of farm products. Meanwhile, China will, with the FTA taking effect, exercise zero tariff on 7,830 items imported from Iceland, which involve 81.6% of China’s total imports from Iceland. In the end, the liberalization ratio in trade volume of zero-tariff products will be about 96.2% and the ratio in tax items will be 95.9%.

Secondly, China’s free trade agreements with Switzerland and Iceland touch on many new rules and subjects, which play an exemplary role in demonstrating China’s confidence and resolution in strengthening efforts to build high-standard free trade areas. China and Switzerland have reached consensus on some rule issues that China seldom met in previous FTA negotiations, such as government procurement, environment, labor and employment cooperation, intellectual property, and competition. There is no unified standard on these rules around the world, but neither side dodged them. The two countries have sought common ground while shelving differences and have reached extensive consensus. For example, China for the first time agreed to set a separate chapter on environmental issues, and clarify specific rights and obligations in intellectual property protection so as to enhance the transparency and convenience in obligee protection.

Against the backdrop of global FTA development, China-Switzerland FTA and China-Iceland FTA have been carried out as scheduled and are of great significance.

It further shows China’s commitment to expanding opening up. The signing and implementation of China-Switzerland FTA and China-Iceland FTA is one of the major achievements made to accelerate the carrying out of China’s FTA strategy; it reflects Chinese government’s willingness to further expand opening up and firmly oppose trade protectionism, and China’s more open attitude to participate in international competition and cooperation in the context of global downturn and rising tide of protectionism. Meanwhile, it also represents China’s confidence and resolution of actively joining economic globalization and regional integration, which is conducive to building consensus from all sides and pushing forward global trade liberalization.